Nurturing the seeds of stability

Colombia is at a crossroads. Over five decades of conflict have left around 220,000 dead. Millions of people have been displaced. But a peace deal between the Government and FARC guerillas aims to open a new chapter in the nation’s history. Fifty years of armed conflict appear to be ending.

As of December 2016, 7.2 million people in Colombia had been forced to flee their homes – that’s more people displaced because of violence than anywhere else in the world.

Among the challenges, housing is in desperate need. More than half a million Colombian families need better homes and more than a million live in poor-quality housing.

In the first of a four-part series covering different perspectives on one project, we explore a story of one community taking part in a Government project to improve 50,000 homes nationwide, through the eyes of Luis Alfredo Torres Redondo – a community leader known as Lucho.

This is a story from El Salado.

Watch the video to learn more

Paramilitary forces spread fear. They threatened people and told them that if they came back, they would kill them.

Following the massacre, people escaped to wherever they could. Many went to bigger cities, like nearby El Carmen de Bolívar, but those from farming communities like El Salado found it hard to find jobs.  Many ended up living and working on the streets. The devastation was total.

El Salado was abandoned. Nobody stayed, not even the dogs.

People believed in nothing due to the suffering and unease provoked by the displacement. They lost the work of a lifetime.

But several years later, Lucho and a group of like-minded individuals returned to begin the task of re-establishing their community.

The challenge was immense.

To encourage people to return, Lucho supported initiatives to help improve the situation in El Salado, to repair some of the damages of the past and make the town a better place. One such initiative was part of the national "50,000 Homes" project. This aims to improve homes based on the needs of each family, incrementally raising the standards of living across communities.

It sounds simple but you won’t believe how complicated it is - individual negotiations per family, individual designs per house, per culture, per environment.

The first step was getting to know El Salado, its residents and their needs.

In building terms, work focused on kitchens and bathrooms – improving the health of residents through more hygienic spaces to prepare food, and providing access to clean water and sanitation.

It took more than a year.

In El Salado, more than 500 tonnes of building materials were needed to improve homes. Like construction work across rural parts of Colombia, many of the materials had to be delivered by hand, and the community came together to help out.

When the forced displacements and the conflict took place, people lost their confidence. Losing confidence can have a terrible impact on people’s lives.

Nearly everyone in the community has been displaced, but for those who have returned it’s becoming home once more.

Kitchens made of sticks and dung are no longer needed. Many residents now have access to kitchens and bathrooms for the first time.

In El Salado, houses are often painted in strong colours reflecting local traditions. Home upgrades took these factors into account, based on the understanding that residents who are more comfortable in their homes are more likely to invest in its upkeep.

In this village more than 70 buildings were improved, homes for around a quarter of the population.

As a member of the project oversight committee, Lucho's role was to confirm that upgrades met the needs of each family.

El Salado is unique. But this project is not a one off. The same thing is happening, town by town, community by community, across an entire nation.

Throughout this series we'll look into the lives of many of the families who have benefited from this initiative. In the next chapter, we'll explore how social housing has the potential to go beyond better places to live to deliver real economic benefits.

"50,000 Homes" is a national initiative of the Government of Colombia. UNOPS is an implementing partner, tasked with upgrading around 3,500 individual homes for approximately 20,000 individuals across the country. 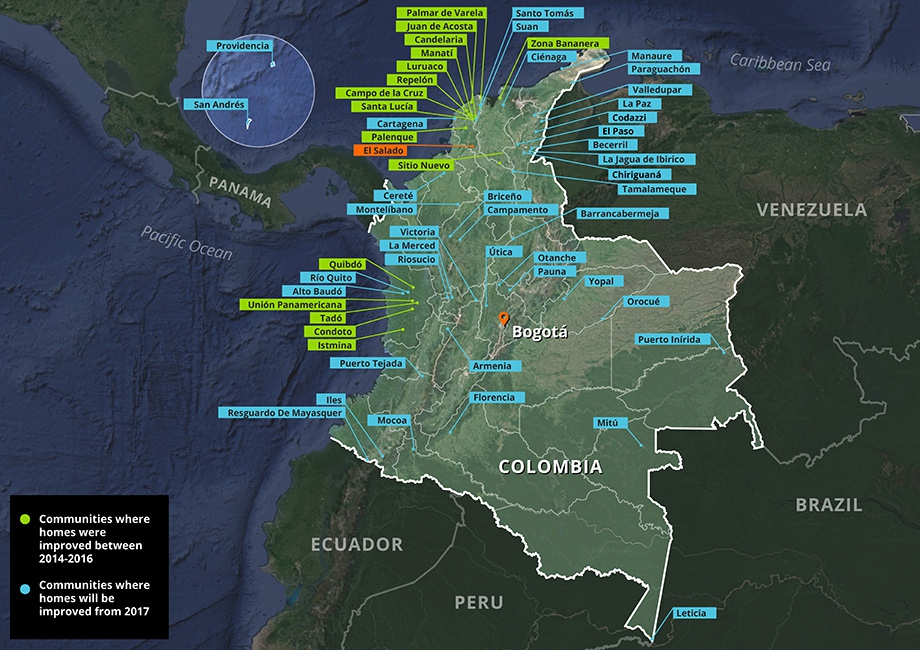 1. Local governments work with communities to identify families who are most in need of help.

2. UNOPS assesses each home, focusing on sustainability factors – for example, families must own their homes, buildings must meet minimum safety standards and be in a stable geographic location.

3. Families who meet the criteria are allocated approximately $3,000 each to improve their homes. This sum can be divided between a kitchen, a bathroom, a roof, a floor or an extension in any way.

4. A UNOPS engineer works with a social worker and each family to design individual plans to upgrade each property. This is based on the family’s needs, social priorities in the home or community, and the best architectural options.

5. Once plans are agreed it takes around four weeks to upgrade each home.