Wherever you go, water is life, yet for many Small Island Developing States fresh water resources are often scarce and poorly managed.

The island of Saint Lucia is surrounded by water, yet for residents of Dennery North water shortages and its poor quality have been the community’s biggest challenge for years.

Access to clean water, or lack thereof, affects all aspects of social and economic life: From the local schools, which have to close when there is no water, to small-scale businesses. Above all, it impacts the health of residents.

Dennery North is a major farming community of roughly 7,800 residents in Saint Lucia’s Mabouya Valley. The harvesting of bananas, coconuts, and other fruits and root vegetables, is a main source of income for many families here. Despite it being the second largest valley in Saint Lucia, with a relatively large catchment, there have been no permanent solutions to collecting and treating potable water.

For Cornelius Ernest, a local farmer, water is everything. Ever since he can remember, the community’s main challenge has been accessing clean water. “This community is definitely not poor, but when it comes to clean water we are the poorest of all.”

Not having a reliable source of water means that even the most basic household chores can be difficult. Sometimes, residents take time off work to collect water. “If you don’t have a tank to store water, you have to ask someone for water or go to the river to collect it in buckets,” said Cornelius.

The water that is currently distributed in Dennery North is supplied directly from the rivers without any treatment other than basic chlorination.

When it rains, the water that runs from people’s taps is muddy, and unsuitable for drinking and carrying out household chores. Due to quality concerns, the water supply is often cut, at times for weeks on end. Residents must then store water in large tanks, which if not sterilized, can lead to serious health issues.

Cases of water-borne diseases like bilharzia and other stomach-related illnesses have been reported in Dennery North, and occur at higher rates compared to the rest of the country. But for many residents, there is no choice but to drink untreated water, as not everyone can afford to buy bottled water every day. On average the cost of a 1.5 liter bottle of water is around one US dollar.

Some in the community believe their water issues are related to deforestation caused by hurricanes or the over-use of soil from banana plantations, which has caused soil erosion. This has made the soil loose, leading to higher levels of sediment in the streams and rivers.

Emrand Matthew, a civil servant from Dennery North, thinks it’s ironic that as a tropical island with lots of forests, surrounded by water, that his community doesn’t have access to clean water.

I think it goes back to the days of the banana industry – the banana boom, where forests were eradicated. Even though the bananas brought income into the houses, we are actually paying now for the effects this has had on our fresh water resources.

“We have a lot of water, but it has not been taken care of. You can’t get any water to drink. I have to buy water to drink for myself and my family. That takes a lot of money from my salary. We have so much water on the island, but water is my greatest problem.”

The children at Derniere Riviere Combined School have big ambitions.

The school stores rain water in large containers to try to ensure it has enough water during times of shortage.

Antonia, a cook at the school, worries about the children getting sick when they drink the tap water.

Sometimes they don’t have anything to drink but dirty water.

“Sometimes for 3-4 days we’re without water.”

Farah and his family run a small bakery on a busy road side. The bakery’s famous salt fish sandwiches attract many locals and tourists passing through, on their way to the island’s many holiday resorts.

Farah couldn’t imagine living anywhere else, but not having a reliable water supply means that time is spent worrying about where to find water, rather than focusing on his family's business.

Some people in Dennery wake up at three in the morning to look for water and have to carry it a long way. I don’t like that. That’s painful. 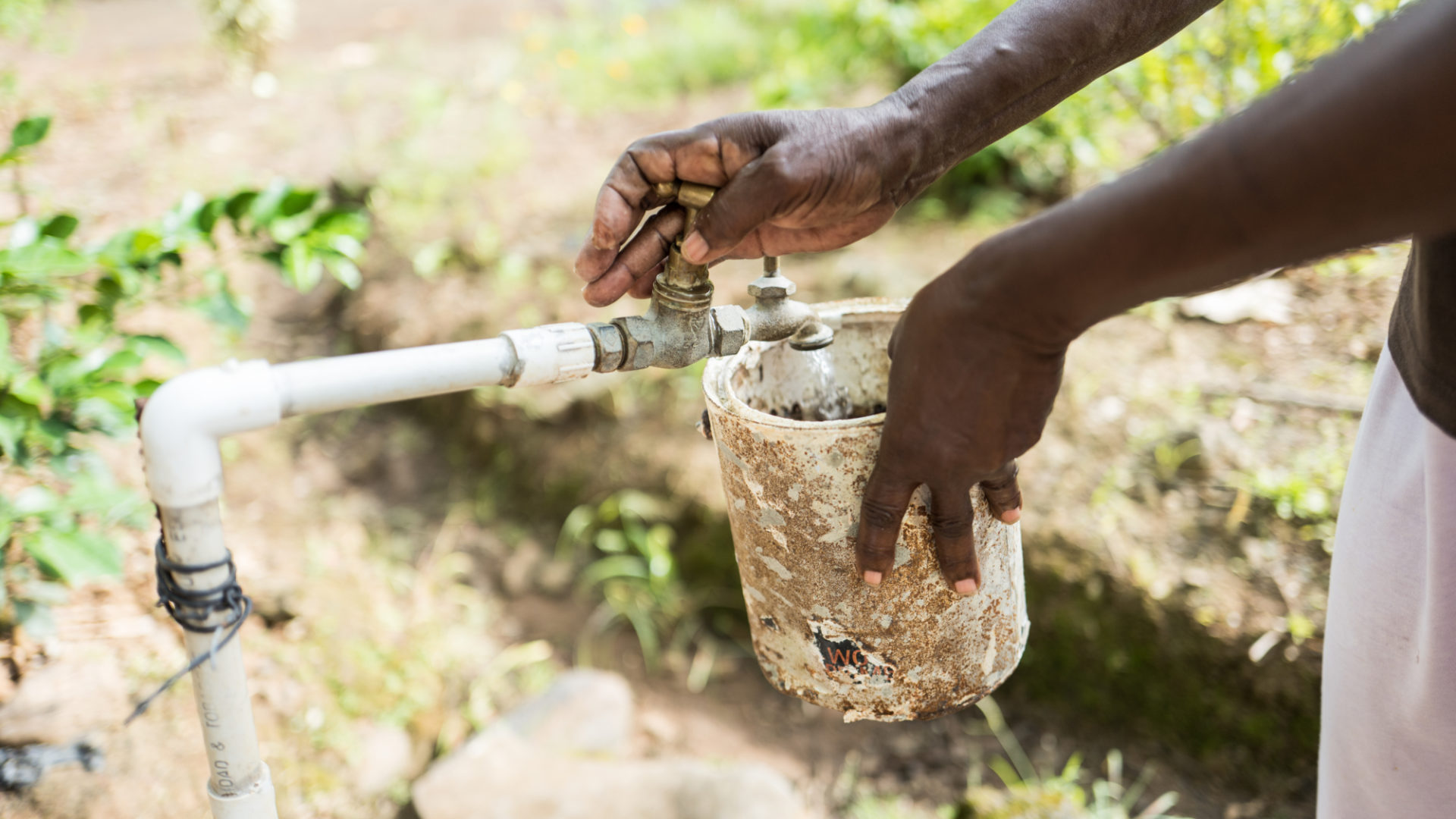 SAFE DRINKING WATER FOR ALL

“Every step of the design has to be cognisant of the active hurricane season that we’re faced with every year.”

For Farah and the rest of the Dennery North community, a new water treatment facility is helping to address the residents’ water issues.

The water treatment plant, which has been implemented by UNOPS, will have a capacity of 1.8 million litres per day. This will provide clean drinking water to the Dennery North residents. The water will be taken from the Mabouya River, a fresh water source, and distributed to the community’s 7,800 residents.

The geography and climate of the area, along with the limited supply of material and human resources, have been major challenges to the project. Given Saint Lucia’s location, the facility and its extensive pipeline system have been designed to comply with international standards in regards to wind and seismic loads.

“Much more could be done to increase the resilience of our infrastructure,” says Fabien Felix, a site engineer from Dennery North. “Every step of the design has to be cognisant of the active hurricane season that we’re faced with every year. Just a few months ago we were spared by hurricane Maria and the damage was substantial to our neighbouring islands.”

Finber Edwards, a Senior Water Technician with Water and Sewerage Company (WASCO), says he is proud to have worked on the project, which has helped him gain valuable knowledge of the water treatment process.

Finber is eager to ensure that the plant delivers quality water to the residents of Dennery North long into the future.

This will be a great help for the residents of this area. Over the past years they have been without quality water... Everyone should be proud when this project is completed and they are free to drink a glass of water

Implemented by UNOPS on behalf of the Government of Saint Lucia