From the sky, the yellow and brown earth looks scorched. With a few exceptions, the usual evidence of modern development is missing. There are few usable roads and buildings are scarce.

Large expanses of land separate small settlements with clusters of huts made from materials found in the area, like dried twigs and soil. Groups of people, dressed in colourful fabric are sitting under trees. Others, with long sticks in hand, walk alongside herds of goats, camels, cows. 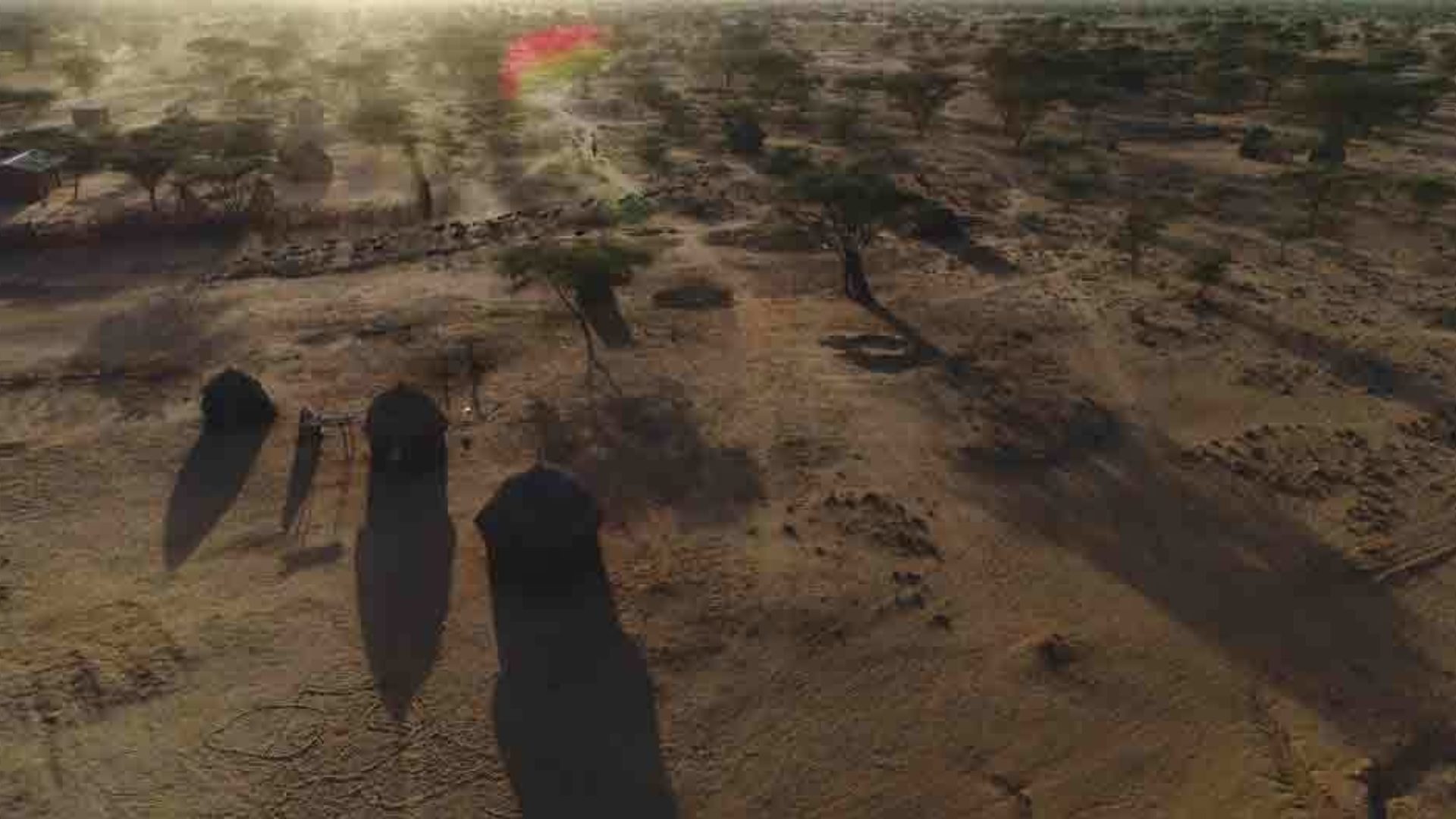 Nilotic people are pastoralists indigenous to the Nile Valley. They make up the bulk of the population in neighbouring South Sudan.

Did you know that Turkana women wear beads which could weigh up to several kilos? The beads are a symbol of wealth.

We are in Turkana County, Kenya, on the borders with Ethiopia, South Sudan and Uganda.

This is one of the oldest places on earth known to have been inhabited by humans and is home to the Turkana tribe today. The Turkana tribe is the second largest nomadic pastoralist community in Kenya, after the Maasai tribe.

The possession of cattle, especially humped cattle known as Zebu, means status here and is central to this tribe’s traditional way of life. Typically, men are responsible for taking care of the cattle, while women build the huts, cook and take care of the children. The promise of new sources of water or pastures for their herds can move entire settlements to places sometimes hundreds of kilometres away.

Faced with one of the worst droughts in the county’s history, sources of water have been hard to come by in recent years and communities have been moving around more than usual in search of it.

According to a recent Government report, Turkana County is home to a population of approximately one million people, 87 percent of whom live in poverty. The Human Development Indicators for the county are, on average, over 30 percent below the national average. Among these are maternal and child mortality rates that are some of the highest in the world.

The biggest obstacle to healthcare is access, mainly impacted by the county’s landscape and environment and the tribe’s traditional way of life. Turkana County is over 68,000 square kilometres. The relatively small population inhabiting the land is broken down into many little groups that are constantly on the move, on the tough terrain.

The nomadic lifestyle is joined by deeply entrenched, centuries-old beliefs that contravene the merits of modern medicine in favour of traditional methods — medicine men, seers, untrained birth helpers. Necessary surgical interventions like caesarean sections are often considered to be a shameful practice and are shunned.

What are Human Development Indicators?

Gilchrist Lokoel, an influential doctor in the area, was born and raised in Turkana. He explains the common view of modern medicine in the area, “Going for an operation is equated to the aspect of going to a ritual that will lead you to death. For some people it is an abomination, in a way, because they believe that you cannot get a baby through the abdomen. I am one of the ‘victims’ who was born through the abdomen and my father was not at all happy and also embarrassed because he was a leader of the community. But still until today it is very difficult to convince them about caesarean sections.”

Under the shade of a tree in the remote village of Kangatosa, next to the village’s only health centre, women gather to see health workers. Some are in different stages of pregnancy. Others have small children. Many women describe how they had walked for hours to make it here. A few of them point down the road leading to a camp they set up to stay a few days, while visiting the clinic for extended treatments.

Sometimes, women cannot reach the clinic in time and have to give birth along the way. It has happened that they bleed to death.

Ruben invites us into the facility, a building that houses delivery, storage and treatment areas. We wind our way through the small space, navigating boxes of medical equipment and medicines piled into every nook and cranny. The delivery area comprises a single cot behind a makeshift screen, in a room that also hosts a rumbling refrigerator used to keep vaccines and other medicine cool. Ruben explained how the centre could lose power for hours, sometimes weeks at a time.

“We have to deliver the baby when the baby wants to come even if it is dark with no power […]there has been cases that the birth attendant here had to hold a torch in her mouth while she delivers the baby,” he tells us.

The small centre can do simple deliveries during the week but when faced with complications — such as necessary caesarean sections and obstetric fistula — the centre has to refer the patients to the larger Lodwar County Referral Hospital, over 45 kilometres away. If an ambulance is not available, women are transported there on motorbikes and sometimes even on bicycles.

A small hut sits a few meters away from the centre. The shaded space, created with sticks bound together and a sand floor, is there to give women in early stages of labour a place to wait and then somewhere to recover after giving birth.

When asked how they heard about the clinic and why they decided to come, many women point to a group of people distinguished by their blue vests — the community health volunteers.

Following extensive consultations with village elders and seers, along with wider efforts to build awareness about the importance of health services in the county, these men and women, selected by members of their own villages, receive training on health related issues. Giving their own time, the volunteers are an important part of a solution to the complex issue of health access in Turkana.

Catherine Nasike is one of the volunteers in Kangatosa. She invites us to experience a day in her life.

To help more mothers and their babies

What's it like to be a health volunteer in Turkana, Kenya?

From Kenya, UNOPS supports a range of development initiatives in 15 countries across Eastern and Southern Africa.

Kenya has some of the highest rates of maternal mortality in the world. According to World Bank data, for every 100,000 live births, approximately 510 women lose their lives during pregnancy and childbirth. To help address this challenge, UNOPS is supporting the United Nations Children's Fund, to reduce maternal mortality and strengthen healthcare services across five of the worst affected counties in Kenya — Turkana is one of them.

As part of this $12 million project, funded by the United Kingdom’s Department for International Development (DFID), 57 health centres were rehabilitated incorporating a range of green technology retrofits and solar powered solutions, designed to minimize electricity usage and provide access to water services. Close to 500 days of training were provided to community volunteers and health workers, with more than 14,000 people trained.

The project was completed in June 2018 and the facilities were handed over in the course of 2017 and 2018. They now stand to benefit an estimated 1.6 million people (based on catchment population numbers) across the five counties: Garissa, Homabay, Kakamega, Nairobi and Turkana.

In Lodwar, the project team renovated the maternity ward at the County Hospital, upgrading the rooms and providing extra space for the women and staff that use the facilities. A new operating theatre has been built exclusively for maternal and infant health-related surgeries.

In Kangatosa, a new maternity ward has been constructed and fitted, with green technology. Funded by the International Climate Fund through DFID, this included the installation of solar panels and energy efficient light fixtures enabling this off-grid facility to be fully functional on solar energy.